This Is Not Goodbye

VCLA’s founder, Dr. Priscilla Partridge de Garcia, participated in her last board meeting today. She is moving to Iowa to be closer to family, and we will miss her tremendously! Although we know that she will still come back and visit, and that this is not goodbye, this is nevertheless a good opportunity to talk VCLA with “Dr. P.”

First conceived in the very early 1990’s, the Ventura County Leadership Academy was always intended to help knit the county together. “I was chair of the United Way board of directors and I realized that the fabulous leaders in Moorpark did not know the fabulous leaders in Oxnard and that those in Oxnard did not know the Conejo ones, and so on,” reports Dr. P. “I worked closely with Harold Hurtt who was the Police Chief of Oxnard at the time and on the United Way Board with me. We thought that if these leaders knew one another and could work together in harmony, what a great county we could have.”

But creating a new organization (and educational program) from scratch is a hefty undertaking. Getting the program up and running took nearly three years because it was challenging to recruit supporters at first. The idea of a county-wide leadership program was new and difficult for many people to get behind. “People thought that it would be in direct competition with the Chamber Leadership programs,” Dr. P. says. This meant that funding was also elusive. In response, Dr. P. had to bankroll the fledging organization until she could get other financial supporters on board. 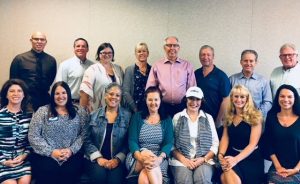 But she did not give up. Scouring the county and her Rolodex, she recruited an impressive list of leaders from the region who saw the value in what she was proposing and agreed to serve on the founding Steering Committee. These early VCLA leaders represented almost all of the cities across the county. They also represented a great variety of backgrounds. “At that time, the United Way was incubating new nonprofits in the county, such as the Ventura County Community Foundation. The United Way also agreed to support us,” which was instrumental in the new organization’s success.

Also important was Coro, a leadership training organization first founded in San Francisco in 1947. According to its website, this program can boast of “at least 10,000 program alumni…currently serving as leaders in local, regional and national/global businesses, non-profit organizations, governmental agencies and elected public office.” Coro helped to provide the structure and curriculum during those all-important formative years.

The first cohort met in 1994 (although the cohorts were referred to as “classes” for the first decade or so). Twenty-two seasoned and emerging leaders from throughout the county participated in the experience. Steve Elson, Ph.D., currently serving on the VCLA board of directors and the CEO of Casa Pacifica, was one of those twenty-two members of Class I. “I was new to the County as both Casa Pacifica and VCLA were both getting off the ground.  Dr. P. invited me to join that first cohort, which I found to be a wonderful way to get to know the County.  Being immersed in key issues – emergency response, water, education, the business environment, county and city government, law enforcement – and getting to meet community leaders was amazing.  This introduction to the ‘way things work,’ along with the relationships I formed have served as a solid personal ‘infrastructure’ for me over the years.”

VCLA is currently in its 23rd year, and it left the United Way nest only last year. The decision to stand on its own two feet and seek 501(c)(3) nonprofit status of its own was not made lightly. And although the shelter and support provided by the United Way for more than two decades was incredibly generous and valuable for the organization, VCLA was in an excellent position to strike out on its own, with a well-respected program, a strong reputation, and a deep bench of alumni, many of whom have proven to be the movers and shakers of Ventura County.

It is that long list of empowered and successful alumni that Dr. P. is most proud of. These leaders, now numbering just over 500, have helped to improve the quality of life in Ventura County, which is exactly what she had envisioned. “I am most proud of how they work and communicate together,” she says.

The fact that many alumni return to support VCLA in one way or another is a testament to the quality of the program and the impact it has on its participants. Much of the current board of directors and advisory board are alumni. “Our current board and leaders exemplify the vision I had when founding VCLA: that it would create and enhance leaders who would continue to make our county great.”

Again, we know that this is not goodbye to Dr. P., but such big moves tend to inspire reflection and an assessment of one’s accomplishments in a place. Dr. P. is tremendously proud of the organization she helped to found, and of the benefits it has brought to Ventura County. But she knows that VCLA’s work is not done yet. To that end, she is quick to remind people that they are never truly done working on themselves to be the best that they can be. When asked for what advice she would give to VCLA participants past, present, and future, she says, “Be yourself and teach everyone what you have learned.  Never worry about competition.  There is really only one YOU.”

Wise words from a wise woman. Thank you for everything, Dr. P.!